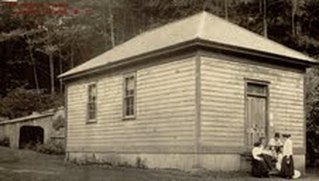 When families first started to settle on Bowen Island there was no school house. In a letter about the early days on Bowen Island, Norah Mannion described her schoolroom as a little old shack at the end of her father's orchard where a succession of governesses taught the Mannion children. When the first governess arrived in Vancouver during a small-pox scare, Norah's father smuggled her off the train in Vancouver and rowed back to Bowen Island in the dead of night to escape the quarantine. Despite this unorthodox beginning, Miss Morrell stayed with the Mannions for a year. The next governess only lasted a few months and the last, Miss Holt. taught the Mannion children for four years.

Norah’s father, Joseph Mannion, donated a corner of his Bowen Island lot 491 for the site of the new elementary school which was built in 1893. It was not far from the schoolroom that had been used by the Mannion children’s governesses. At first all that was there was the one-room red building with its box heater in the centre of the room. In common with countless other classrooms in the Dominion, there was a picture of Queen Victoria above the blackboard flanked by the Union Jack, and the world was represented in the globe on the teacher’s desk. The more rustic flavour showed in the kalsomined (a form of whitewash) walls and the water pail by the door – the water was carried by pail from a nearby creek.

The community was closely involved with the school. The early minutes of school meetings show many well known Bowen Island names. The meeting to elect the first trustees was held at the home of W.J. Davies. In further business at that meeting, Wm A. Grafton moved that the just elected board of trustees apply to the government for a School House, Land and Teacher. Evidently they were successful as this meeting was held in 1893.

The first teacher was William Acheson who boarded with Dewitt Becker and his wife. The Beckers had eight children and Mr Acheson “carried the five-year-old piggyback to school with him.” (P.163 Howard, Irene). Mr. Acheson married Miss Holt, the Mannion children’s last governess. The former governess could probably tell her husband a thing or two about teaching in such a rural setting. In her letter Norah Mannion remembers that she and her two brothers were often very late for class when they started going to public school. They always carried a hand fishing line and would stop to fish if they saw brown trout as they crossed the little bridge on their way to school. They would leave the caught trout in a small pool to pick up on the way back from school.

A need to stock the family larder seems to have been common for these early school children. Laura Collins taught in the school from 1906 to 1909. As she told her daughter, Marion Moore; one of her early memories was asking pupils to leave their guns in the cloakroom. Shooting a deer or grouse for dinner on the way home was not uncommon.

When Marion started school in 1928 guns were not tolerated in the school. By that time there had been some changes to the little red schoolhouse - a covered front porch, additional windows and running cold water in the cloak room. Two wooden outside buildings provided toilet facilities. Lighting after school or on dark days was by coal-oil lamps.

These are Marion Moore’s memories of her school days:

My sister Margaret taught in this first school in 1929 and 1932. Grades were 1 - 9 and then Provincial correspondence courses. Class size through the years fluctuated but was around 25 for all grades together when I went to school.

Students walked to school no matter how far away they lived. We brought our lunches, mostly in metal lunch pails. There were some beautiful natural places close by where some of us would congregate to eat our lunches before playing traditional children's games. Skipping was popular as were "rounders, "high -over", "run-sheep run“; to name a few. One of my memories was, after a lunch hour of strenuous activity, dashing to the creek and lying down to gulp the cold water. The rainy day play area was the wood shed or in the school

It may have been the Depression which gave rise to a population increase on the island. In 1935, land was acquired from the Union Steamship Company and a new two room school was built. What a luxury it was to have a basement to play in on rainy days, flush toilets and that wonderful aroma of fresh paint and new wood. This second school was accidentally burned in the fifties and, after using some existing vacant buildings, the pupils moved into another new but smaller school house close to site of the burned one. In 1977, after land was donated by Crippen Engineering, the present much larger community school was built.

When viewed through the veil of nostalgia, memories of early Bowen Island school days seem idyllic. It must be remembered that these early school children learned by rote from prescribed texts before going home to do more chores. It may have been a simpler time but it was also a time that was full of hard work.

Information for the story about early school days was obtained from Marion Moore, Irene Howard’s Bowen Island 1872-1972, and the Fougberg Fonds and School Fonds at the Bowen Island Historians Museum & Archives.