Finding History in a Name 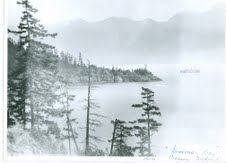 Picture yourself as a tourist in an unfamiliar place. You check out the famous attractions and the more adventurous among you wander off the beaten path. Sights that have faded into the background for the native will be fresh to you as a new visitor and many of the names will strike you as odd and sometimes unpronounceable. Maybe you will question where those names came from in the first place.

What if you were a tourist on Bowen Island? Names here give clues to the history of the area just as they do in your far flung travel destinations. Bowen Island was named in 1860 in honour of Rear Admiral James Bowen, who was master of HMS Queen Charlotte during the battle of “The Glorious First of June” [1794].  The Rear Admiral was reputed to have taken his ship so close to the stern of the French flagship Montagne during this sea battle that the Montagne’s flags brushed the shrouds of the Queen Charlotte as Bowen poured shot into her. That is how the island came by its name but what about the names of the places on the island itself?

Did you know that Dorman Bay was named by the Vancouver City Archivist?  A trawl through the Vancouver Archives will bring to light 1951 correspondence between the city archivist, Major J.S. Matthews, and the Surveys and Mapping Service about the government’s new map of Howe Sound. At that time the bay was named Salmon Bay and as there were already two Salmon Bays in BC, Major Matthews suggested the name of Dorman Bay. Further correspondence with Percy Dorman gave permission for the use of the Dorman name and eventually (this was a government project) the bay became Dorman Bay.

The Cowan family also named many of the places around their holdings. In Bowen Island 1872-1972 Irene Howard tells the story of how one day in 1907 the Cowan family headed out in a boat to name all the bays around Cowan Point. There must be stories behind the naming of other parts of Bowen Island.

Do you know how different areas of Bowen Island came by their names?

Please tell us about it. Send your story to bowenheritage@gmail.com.


Sources for the naming story came from the Bowen Heritage Website, Irene Howard’s Bowen Island 1872-1972, and the correspondence of Major J.S. Matthews at the Vancouver Archives.

Thank you to the Bowen Island Historians Museum & Archives for the use of their photo of Dorman Point in 1915.