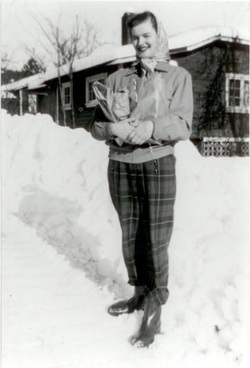 IT WAS THE END OF A LONG JURY TRIAL IN NEW WESTMINSTER  and the storm was coming in fast. The jury had been instructed by the Judge and had been sequestered. The work was over and all we could do was wait—not relax or stop thinking about what had gone on, just wait. There was always other work to do, but it had to be easy, not a lot of concentration. What helped most was to go for walks but not too far and not for long. With sleet and wind outside, that generally left pacing the corridors. The courthouse has plenty of windows and as afternoon turned into evening, the supper break long gone, exhaustion had a brittle edge, watching and worrying about the storm and the roads and wondering when we would all get home.

There was no hope of catching the last ferry. That left the water taxi. I wanted to get home to turn a tap on and keep the water moving through the old pipes as the temperature plunged. The fire in the wood stove would have been long gone, and power failures in any amount of wind were common, so the place would freeze easily overnight. Single pane wooden frame windows look picturesque, but had lots of drafts that drapes and door snakes could only dull. Warm slippers, heavy sweaters, knitted afghans and pots of tea curled up in a chair beside the woodstove—that’s where most of life passed when living in one of the Orchard cottages in winter. There was plenty to commend the cottages, but a winter storm wasn’t high on the list.

At 9, I asked the sheriffs if they had made arrangements for a hotel for the jury and they had. I asked if they could get me in to speak to the Judge. I needed to include the prosecutor and the other defence counsel in any discussions and went to round them up. Once the group was assembled I explained that I lived on Bowen. The Judge reminisced about how his family had spent summers in just such a small cottage. I said that was exactly the topic I wanted to raise. I lived in one of those cottages and it was not well insulated, especially the pipes, and that I was very worried about getting home on the last possible means of transport to the island, assuming the water taxi could navigate in the storm. Would he consider ending the already very long day no later than 1030 so that I could drive to Horseshoe Bay in time to catch the 1130 water taxi? He smiled. Perhaps I should have let him reminisce longer about the cottages and the summer paradise. Perhaps I should not have asked for any special consideration. He said, “No.”... he usually let a jury work until 11 before he put them "to bed" and he wouldn’t change that practice just because of a storm.

The jury came back with a conviction ’round about 1015. I raced out of the courthouse and careened along the highway frantic to get the water taxi. I picked up a speeding ticket just past Caulfeild but when I explained I was racing to get the water taxi the officer wrote the ticket as fast as he could and told me to slow down the rest of the way. What felt then like the only good things that happened were that I did make it home, did get the fire started and the pipes did not freeze, and I was left with a clear recollection of how to endear yourself to people asking favours.

Photo: Mary Collins in front of Davies Orchard Cottage 18 in the winter of 1953-1954. This story also appeared in the Bowen Island Undercurrent, Feb. 24, 2012, as part of its Heritage Week supplement.

Judi Gedye is recording secretary for the Bowen Island Heritage Preservation Association and a provincial court judge. In the 1980s, she lived in an orchard cottage.