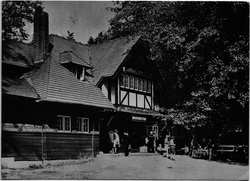 The Old General Store served Islanders and visitors alike from 1925 until 1975.  Marion Moore recalls its early days as a Union Steamship store, when there were only about 150 people living here:

"The first manager's last name was Bird. He and his wife and daughter lived above the store where my sister Betty used to go and play with the daughter who was also named Betty.  Sister Betty remembered the whole family being exceptionally small and she thought at the time the small windows on the second floor were installed for their benefit.

In 1927, Murray Hume and his wife took over. My early memories are of that time and beyond. She generally did all the Post Office work while he tended the store. Mail was daily and people picked it up at the P.O.... Fresh produce was sold in bulk and weighed out at the counter. Baked goods came by Steamship from companies like McGavins.  One of the regular helpers was George Ward, who later did most of the Post Office work. They hired more help in the summer when they sold ice cream and expanded the meat counter… after [the Humes], in the forties, some of the managers were George Ward, Cecil Black and Wes Graham."

During the winter, the Old General Store also served as cafe and social centre.  Mrs. Douglas M. Harding, who ran the store for 15 years, recalled, "In winter especially there just wasn't much doing and people would just drop by and have a cup of coffee and chat."

As the tourism business ground to a halt in 1956, the Union rented the building to a succession of tenants (Lloyd Walters, Tom MacKinnon and the Lock and Stansfeld families) who continued to run it as a general store.  In 1975, the business moved into new premises further up Government Road.

How we nearly lost it... 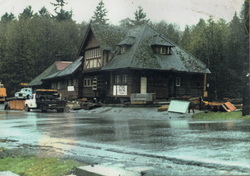 Preparations begin to move the Old General Store
The Old General Store was boarded up in 1975 and, looking distinctly shopworn, quietly passed into the hands of Crippen Engineering Limited.  Crippen announced in the fall of 1978 that they would demolish the building the following January.  News of the impending demolition did not sit well with Islanders.  The community had just weathered a storm of development interest sparked by the purchase of the Old General Store and the large block of land that is now Crippen Park.  The buyer, Stan James (Maui Holdings) was a developer who had big plans for his Bowen holdings:  2000 houses, a ski resort at Mount Gardner, condos overlooking Killarney Lake and a full-size golf course.  His dream was to transform the Island into a high-end destination resort.

These plans were not welcomed on Bowen.  The old Union tourism business had been quite different:  family-oriented, good clean fun, for the most part, leaving aside the odd story of what went on at the Dance Pavilion. James didn't help his case by summarily closing off access to his land, shutting down drinking fountains and generally disregarding Islanders who had been a very real part of the Union's operations.  Fortunately for the prevailing sentiment, James' plans were bigger than his budget and he soon lost his holdings to his first mortgagee, Crippen Engineering Limited.

The community's response to its brush with Mr. James was decisive:  the old Union lands should be kept as a single parcel and the whole of it should become a park. 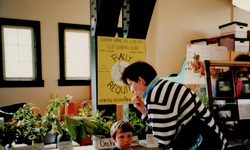 A relative newcomer to the Island then, David Smith galvanized community response by persuading Crippen to put its plans on hold while a solution was found.  He convinced the Ministry of Highways and Public Works to authorize the continued encroachment of the building on the road right-of-way, and then he called a public meeting.  From that emerged an ad hoc committee with two lofty goals:  to restore the Old General Store and to turn the old Union lands, now owned by Crippen Engineering, into a park.  By December of 1978, the committee had confirmed with experts that the restoration was feasible and events began to move very swiftly.

The committee incorporated as the Bowen Island Park and Store Use Society (BIPASUS) and set up offices in the Store, hosting an Open House in February of 1979.  From the outset, Store "use" was a major objective:  the building should be available for the community, generate enough income to keep it maintained and offer special events to attract visitors.  Within a month, the Society had commitments for 3 permanent, year-round tenancies (the Chamber of Commerce, Bowen Island Historians and the Post Office).

BIPASUS launched a fundraising campaign, secured agreements for reduced rates for the necessary building materials, signed up skilled volunteers and prepared a plan to undertake the restoration.  By April, 1979, they had prepared an extensive brief for the provincial Heritage Advisory Board in which they outlined the plan:  using local materials and volunteer labour, the restoration would proceed as a series of building bees.

At the same time, a Park sub-committee of BIPASUS pulled together  all the documentation to support the creation of a park.  And an Acquisition Committee was formed to contact all of the necessary agencies and persuade them to purchase land.  Appeals to the province for funds to purchase the lands as a single block met with delay after delay:  an Order-in-Council that would have created "W.A.C. Bennett Park" was turned down at the last minute; a second attempt was stalled when an election was called; but on the third attempt, the province loaned the purchase price to the Greater Vancouver Regional District.  The GVRD negotiated the sale, promising to name the park for Crippen Engineering in return for a favourable price.

Meanwhile, the community was raising the funds required to restore the building.  A flea market, known as 'the Fleam', was set up in the building and sold every imaginable item.  It even had an appliance repair area.  One  savvy shopper recalls the great deals to be had at 'the Fleam' at the end of the summer when seasonal residents packed up for the winter.  As a fundraising effort, it was a stunning success:  $32,500 was raised (in 1980 dollars), to partially finance the building restoration.  Grants from Heritage BC and a youth opportunities programme supplied the rest.

Looking back on that effort today, David Smith observed that it all took place "at a time when we could argue all day [about what the next steps should be] and then go to the Legion together that night."  The community was overwhelmingly in favour of the BIPASUS goals, although some opposition emerged very late in the process.  Not surprisingly, it was the fear of the island being overrun with tourists.