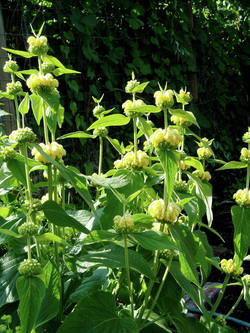 A striking and unusual member of the mint family, this plant has so many names that you might well know it by another. Lamiaceae phlomis russeliana (Sims) Bentham is its proper name; it goes by a variety of common names including Jerusalem Sage and Russel's Sage. It's also, oddly, known as lamiaceae phlomis Smith--giving rise to its pet name in our garden, which is simply, "Smith".

Visitors to the garden invariably stop to ask about Smith.  The three large plants on the western, terraced garden border grow to a height of 3' or more with a fresh, lemon-lime colouring that draws the eye.  Its winter foliage is quite different, but equally striking:  low mounds of large, grey-green, hairy leaves set off tall brown stalks with distinctive seed pods.

This is a very special plant for our garden, because the bees flock to it.  But better than that, it's bee habitat: a tiny species of bee lays its eggs in the mature seed pods--as I discovered while collecting some of the seed early in spring, when I accidentally ejected a tiny, sleepy-looking bee from its nest.

It's important that we keep the Smith in good condition, with upright stalks to support the seed pods and encourage the bees to multiply.  It produces the largest seed pods when well-watered throughout its blooming period in June.  Smith reproduces at a moderate rate by way of runners--they're quite thick and break off rather easily, so it's easy to keep it from spreading or to propagate it.

The other interesting thing about Smith is that it contains an essential oil that has antibiotic properties that are effective against common food-borne bacteria. It's been used for centuries for food preservation.  The plant is native to Turkey but has been common in English gardens since the 1900's. 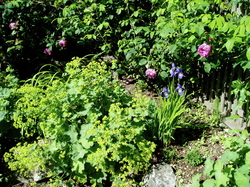 Our "Old Nanaimo" cottage rose was donated by Marion Moore and Jean Jamieson from Collins Farm.  Its densely packed, fragrant, deep pink blooms signal the beginning of the garden's best colour in June.   Blooming at the same time are Siberian iris in purple, yellow and white; Lady's Mantle (foreground) in a froth of yellow; pink and blue mounds of true geranium; a deep pink Rosa Rugosa with a heavenly scent; and of course, Smith. 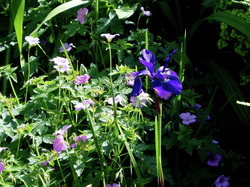 Purple Siberian iris is found throughout the garden.  Here, it blooms beside a low mound of pink cranesbill geranium in June.  This geranium will offer a second round of blooms in September if it is trimmed back after its first blooms are gone.

The cranesbill geraniums are named for their unusual seed pods: a long, bill-like structure holds 4 seeds at its base.  When ripe, the 'bill' lets go and flings the seed away from the parent plant.  If you collect the pods just before they've fully ripened and put them in a paper bag in the sun, you will soon hear a sound like a bag of popcorn popping!  The seeds germinate quite readily in the garden. 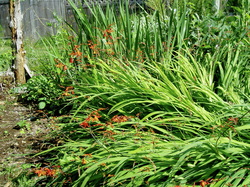 The garden palette changes completely come July, when the vibrant orange/yellows of Montbretia and Daylily take over.  In 2011, we will add Lucifer (a red crocosmia) and deep red Bee balm (Monarda) to the mix.

Montbretia (Crocosmia x crocosmiiflora) is a tenacious, but fortunately lovely plant that reproduces by means of both corms/cormlets and rhizomes. It has the odd habit of reproducing its corms in a vertical tower which, in our heavy soils, eventually causes the plant to topple sideways as we saw in the garden in 2008/9. Some of those corms will send out rhizomes--bright white, fleshy shoots emanating from any point on the corm--each of which will grow into a new plant. All of the corms and cormlets will also, once they break away from the 'tower', send up new plants.  Because it's such a prolific reproducer, it's important to lift the plants every 3 years or so and thin them out and resettle the corms upright. This is best done in the fall, just after the blooms finish. Corms should be planted 5" deep and 4"-6" apart.

As we began lifting our patches of Montbretia in 2009, we found huge masses of corms and cormlets, often 7 corms deep on the 'towers'. The whole mass was growing so densely that few weeds actually surfaced among the Montbretia blooms, although the corms were interwoven substantially by the thick runners of buttercup and morning glory.

Montbretia is variously listed as 'deer resistant' and 'seldom severely damaged by deer', and has survived inquisitive nibbling outside the garden fence.  It should be located with caution in any garden; in Australia this plant is listed as a noxious weed and is rapidly overtaking streambanks, where its heavy mass of corms contributes to bank erosion, washing clumps of corms downstream to infest new areas. 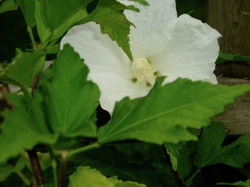 This hibiscus nearly fell victim to the axe, having failed to bloom for three consecutive years.  Just as we were laying plans to take it out, it produced these lovely white September blooms.  Pruning in early spring encourages the development of lateral branches on which the flower buds develop.  Ours had not been pruned in living memory, with the result that it was an unlovely upright, slightly shrubby plant with little to recommend it.  It has now had a hard pruning and we'll see how it does this year...