Vancouver in the Steamship Era: Why Bowen Island Became so Popular 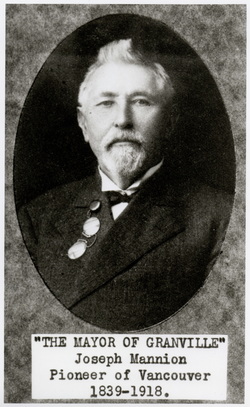 Mannion was an hotelier until he retired to Bowen.
A snapshot of life in Vancouver at the turn of the century makes it easy to understand how Bowen Island became such a popular destination resort so quickly.  In 1900, when Captain Cates conceived his scheme to turn Bowen into "Vancouver's Playground", the City had some 30,000 residents.  Major employers were the fishing and timber industries and there was already significant tourism.  Agriculture was extensive throughout the Delta and Fraser Valley.  People traveled by streetcar, boat and later, by electric train throughout the region.  Horse-drawn private carriages were still common and the first gasoline-powered motor cars were just being introduced.

Queen Victoria still reigned.  In December of 1900 the City threw a welcoming parade for returning veterans of the Boer War.  The major public event of 1901 was the visit of the Duke and Duchess of York (later to become King George V and Queen Mary).

Social and leisure activities were centred around the home, clubs of every sort and the churches.  People gathered publicly in numbers for sporting events, but there were few places of commercial entertainment.  The first (and only) cinema in Canada opened in 1902 on Cordova Street.  The Edison Electric Theatre showed silent motion pictures.  Hotels offered dining lounges and saloons catered to workers, but neither were seen as acceptable places for respectable people to socialize.

Cates' idea of offering a steamboat day trip to a giant picnic ground with organized games, entertainment, food, swimming, horseback riding and trail-walking would have presented an extraordinary novelty in 1902.  Cates was able from the start to handle large groups and so the clubs, churches and societies around which social life was organized took advantage of the opportunity to hold picnics on the Island.  As a destination resort, Bowen Island offered an affordable, unique vacation for Vancouver families.

In those early years, prior to the Prohibition Act of 1917, the sale of alcohol was largely unregulated and was the cause of a great deal of concern for the moral tenor of Vancouver society.  Saloons operated 24 hours, 7 days per week.  In 1888, there were already 45 saloons operating in the waterfront area around Gastown alone. (see note 1)  Prohibitionists worked actively to curb the sale of alcohol and the evils they associated with it:  drunkenness, improvidence, prostitution and disease.  The struggle was drawn on class lines, with the saloons seen as the domain of the working class and the middle and upper classes increasingly engaged in temperance efforts.

Feeble attempts to regulate the saloon business failed to satisfy the increasingly active temperance movement and by 1917, the Provincial Government passed general legislation prohibiting the sale of all alcohol.  Prohibition didn't last long in B.C.--it was over by 1921--but efforts to control the moral character of public drinking did not end until well after the Second World War.  It took fully four years following the end of prohibition to work out a regulatory scheme for what became known as "beer parlours":  strictly licensed establishments that could sell beer (and absolutely nothing else) to seated patrons of acceptable character.  All other alcohol was sold at government stores and one required a licence in order buy it.  It was expensive, as well; with the result that both the regulatory scheme and economics conspired to continue the class divide around social drinking:  workers drank beer in stark rooms where no form of entertainment--even the singing of patrons--was tolerated; the better-off members of society drank their licensed liquor at home or in the numerous private clubs that opened up at the end of Prohibition.  Social mores continued to hold against drinking in public, but the regulatory environment was completely undermined by the private clubs and so, of course, people of all social strata continued to drink, albeit separately.

It was in 1924, in the aftermath of prohibition, that the Union Steamship Company (the new owner of Cates' Bowen holdings) opened the country's largest dance pavilion here and began offering "dance cruises" aboard the luxurious Lady Alexandra, flagship of the Union line.  The Lady Alex carried 1400 passengers and offered dining, dancing and drinking to men and women in the same lounge:  all strictly forbidden by regulation on land, but beyond regulation aboard.  After the short cruise to Bowen, passengers walked a forested trail to the dance pavilion, where some of the best dance bands of the era played.  The pavilion could accommodate up to 800 couples on the dance floor, making it by far the largest centre of commercial entertainment to be found in the region.

Little wonder that the dance cruise was soon known as "the booze cruise".  At $1 for a ticket, the trip was affordable for a wide spectrum of society and must have provided considerable challenge for the temperance-minded among Vancouver's parents.  Photographs of the pavilion show a dance floor packed with youth, dancing energetically to the strains of big band jazz and blues of the day.  One account of the arrival of the Lady Alex describes the ship's stewards stacking inebriated passengers like cordwood on the dock.